Cardiff was once one of the world’s busiest coal ports but where does it sit today in the ranks as one of the UK’s four capital cities.  What does Cardiff offer its 80,000 student population and importantly if you are a property investor, what would attract you to invest in student property in Cardiff?

Cardiff has one of the youngest and fastest rising population in the UK.  Attracted by a strong job market and a number of high-quality school and universities.  Cardiff has a high density of young people and compared to the UK has a higher number of people ages 15 to 34.

Education is key to Cardiff’s economy and its universities are attracting rising levels of demand from students around the world.

Since 2010/11, Cardiff has seen a 137% increase in students living in private sector purpose-built student accommodation (PBSA).  With an increasing international student population, combined with higher levels of quality and facilities student will now pay premiums to access PBSA, which is Cardiff’s most in-demand sector of the city’s student property market.

This growth has a huge positive impact on Cardiff’s student property sector, however still remains significantly under-supplied with student currently living in traditional homes of multiple occupancy (HMOs) which is of a poorer quality and standard and facilities and it also means they are living further away from the city centre and amenities.  To walk from Cardiff university, areas such as Cathays and Roath are 15-minutes and 30 minutes respectively.

Moreover, Cardiff council have plans and are already making it harder to gain a HMO licence in their bid to reduce the number of HMOs in these residential areas of the city.  Local property agents have waiting lists of professionals who want to live in these areas, but these primary residences are currently being used as HMOs. On the flip side the city’s student unions are reporting that students are increasingly looking for better standards of accommodation.

A world-class city of Education

Part of the prestigious Russell Group and considered one of Britain’s leading teaching and research institutions – ranked 5th for quality of research and 2nd for impact of research in the UK.

The university has seen substantial investment in refurbishment, with recent developments including £14 million Learning and Teaching Centre and a £18 million new Medical Education Centre.

• The only Russell Group University in Wales
• Located in the city centre (CF10)
• 24% international students
• Highly regarded research institution, ranked in the world’s top 100 by the Academic Ranking of World Universities 2017

Named the number one institution in the UK for overall international support 6 times since 2007. Home to nearly 14,000 students and divided into five specialist academic schools, offering focused research and study opportunities.  The university has over 1,200 international students from more than 140 countries.

Producing successful alumni such as Sir Anthony Hopkins, The Royal Welsh College of Music & Drama is a renowned institute of the liberal arts. In 2011, it opened a brand new £22.5 million facility offering state-of-the-art rehearsal spaces and gallery for its students.

The University of South Wales is focused on offering world class education opportunities in the city, the university has invested more than £170 million on its Cardiff campus over the course of the past seven years.

In November 2017, the university officially opened its brand new £3.7m Sport Park, which includes a full-sized FIFA-approved 3G pitch; one of only three built at a UK university. 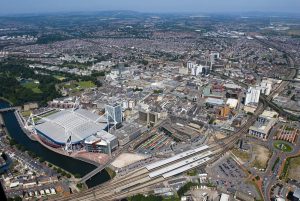 Cardiff still holds huge opportunity and in need of investment with the city being classed by Knight Frank as an “emerging market” and this is due to the demand for PBSA.

This project will part-way help the city by providing 401 students the solution they are so desperately searching for.

More on Cardiff, check out … Cardiff – A Growing City