Cardiff remains a key hub for the import and export of metals and materials and today a key driver of Cardiff’s economy is the business and financial services sector.  Cardiff’s economy is growing at a fastest rate than that of the four British Isles’ capital cities.  The city contributes 20% towards the entire gross domestic product of Wales.

Additional to its 470,000 population, Cardiff receives more than 18 million visitors each year, attracted by the city’s major tourist destinations and iconic landmarks. 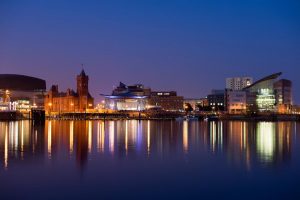 Cardiff has seen huge transformation over the last 10 years, striving towards its ambition to become one of Europe’s most successful cities and a top business, cultural and leisure destination.

The main regeneration programmes include world-class venues such as the:

The Central Square regeneration project is definitely the most ambitious Wales has seen and reflects the cities rapid economic growth.  The masterplan will see the construction of what will be the tallest building in Wales, a new transport hub in the centre of the city and the creation of nearly 1 million sq.ft. of new offices, retail and residential space.

Phase one of the scheme has already completed – a 134,000 sq.ft. multi-storey office building with spectacular views of the city.

Phase 2 of the programme is now underway and will see the construction of a new £120 million headquarters for the BBC Cymru.  A new economic impact study published recently by BOP Consulting, has found that BBC Wales’ decision to relocate – triggering the biggest urban regeneration project in Wales – is on track to deliver a £1.1 billion economic boost to Wales and leading to the creation of 1,900 additional jobs over a ten-year period.  Building hand-over was in 2018 and installing broadcast technology takes approx. 18 months and the first staff hope to move in and open it to the public by the end of 2019.

This project will part-way help the city by providing 401 students the solution they are so desperately searching for.

More on Cardiff, check out .. Cardiff, Uk: Why invest in the closest capital city to London?